As part of my research for the standing studio I had an email conversation with Jory Prum. He is the owner and operator of studio jory. This Frisco Bay Area recording studio focuses on video game audio. And is one of the inspirations behind this concept. His long list of past work includes Double Fine’s “Brütal Legend”, LucasArts’ “Knights of the Old Republic”.

Anton Woldhek: How long has Study Jory been in its current location?

Jory Prum: I signed the lease on February 2, 2004. Construction began on March 5th. 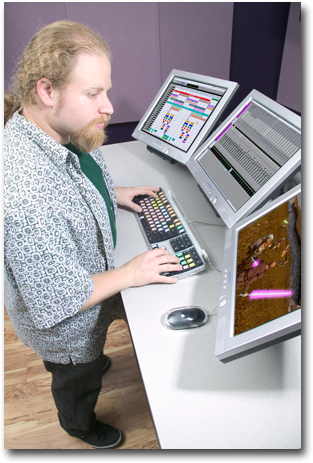 AW: Nice congrats on going into year 8 for studio.jory.

AW: How and why did you come about the idea of having a studio that can used both seated and standing upright?

JP: I’ve been standing at my workstation since I was at LucasArts. When I was working there, I was often going back and forth between my studio, other people’s studios, and the recording studio. It was a lot of sit down, stand up, sit down, stand up, etc. At one point I was up at Skywalker working on the Pixar film “For the Birds” and saw someone working at a standing workstation and thought, “Wow! That’s a fantastic idea!” So I asked my boss if I could change my workstation to be standing. He said “ok” and I did it. When I started upgrading my studio around the time I departed LucasArts, I decided to continue standing and spent months looking for an appropriate desk, finally locating one on “close-out” (no one wanted it but me!).
When I built the current incarnation of my studio, it was a foregone conclusion that I’d be standing. I had to order custom-built speaker stands that were the correct height. I also bought tall chairs for my clients, but none of them have ever wanted to sit tall, so they rely on my ears. They’d have to rely on my ears anyway, right?)

AW: Is that still the main reason for having a standing up position? I’m guessing you are not moving around as much between studios now that your are in your own company.

JP: Well, I don’t have the same needs in terms of moving between rooms, but I still find it more comfortable to be able to stand or sit, changing between them frequently.

AW: Do you switch between seating and standing during the day. and if so how long do you tend to work in either position?
JP: I do switch back and forth throughout the day. Longer sessions often find me sitting quite a bit, but I tend to stand when I’m mixing. 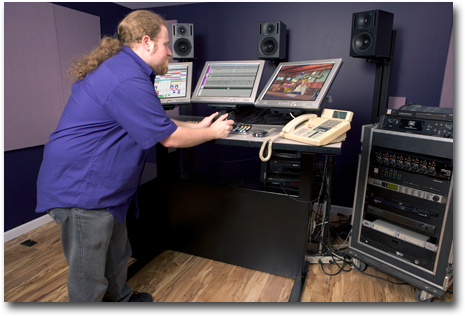 AW: Have you noticed anything different about acoustics or perhaps even psychoacoustics of sound while working standing up?

JP: Most definitely. When I’m seated, I don’t move around the space as easily, so I only experience the mix in one spot. But when I’m standing I move quite a bit, which puts my ears in different places in the room. So the psycho-acoustics change, even if only moving my listening position by a couple inches.

The biggest issue I’ve found in having setup my studio this way is that I’m not terribly tall and the room is configured for my height. When taller people come into the studio, I find they have to either stoop or lower my chair so they can have their ears in the listening position. Shorter people have no choice but to sit in the chair, as they’re never
tall enough to get into the sweet spot.

That said, I still prefer having my workstation the way it is. And it’s a good thing I never felt the need for a console! (How would I put an ICON at the correct height!?)

AW: Thats an Interesting point about the tallness of individuals that visit. I dont plan to use my own room as a client review room as such but this is definantly a problem you wouldnt have sitting down, where everybody is pretty much the same ear height.

JP: It’s really only a casual issue, for when someone comes into the room to listen and doesn’t feel like sitting down. But it isn’t something that crossed my mind when I was first designing the room, since my height hasn’t changed in years!

AW: You mention that you enjoy mixing standing up. Are there any other things you enjoy particularly standing?

JP: Mixing is the only task that comes to mind that I’m reasonably certain I do more of standing. Of course, if I was using a traditional console (or a multi-fader control surface), that might change a little, since relative position to the faders becomes more critical.

AW: Over the years, have you encountered any other (sound) studios that had a standing position? 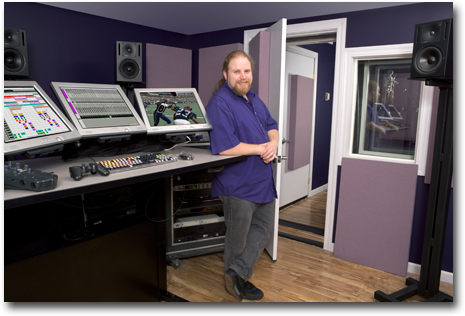 JP: Apart from one sound editor at SkySound back in 2000, I haven’t ever seen another standing workstation in a control room, at least not that I recall. Mine might be the only one.

AW: Well I’m going to do my modest effort to change that. Thanks Jory.

For more pictures including a lot from the build out of the studio visit Jory’s website at studio.jory.org