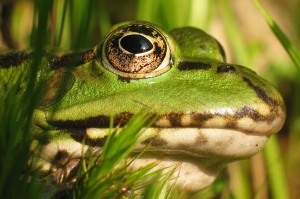 This weekend I was out camping in Nieuwland, Zuid-Holland. We were staying at a friends farm for her birthday party. I was walking my dog when I heard a beautiful frog call, walking further along the water I could hear multiple individuals of this species, which seems to be the “Edible Frog” (Pelophylax kl. esculentus). In dutch know as the Bastaardkikker. Although this I found out later through the help of some of the friendly folks on the nature recordist listserv.

I went back to the van and grabbed my Sound Devices 722, with Sennheiser MKH60/30 MS setup. I walked along the waterfront to find a nice spot. I ended up in a part between 2 farmhouses, a distant cowshed about 50-75 meters away. This was at 1 AM mind you, so the frog was very active. At first when I stopped it became very quiet. Probably because I also brought my dog. But we planted the gear, sat down beside it and we both listened to the frogs calls. They had this beautiful reverberation from the farm houses, and sometimes you could hear the cows talking to one another in the background. I really like the recording because of that, it gives it a lot of depth.

Its also inspiring my for a little side project. There seem to be 11 species of frog in the Netherlands. It would be cool to make a collection of all the frogs.